Paul was invited by Bowls England to give the toast on behalf of the guests and was given a standing ovation after a powerful and inspirational speech.

BE President Michael Jennings outlined the highlights of his season which included the match played against DBE at Didcott BC and was delighted to announce that money collected at the presidential matches throughout the summer would be given to DBE, his nominated charity. He then proceeded to present Paul with a cheque for £7500.00

It was a great night helping raise awareness for disability bowls and Paul enjoyed the company of Bowls England CEO, Tony Allcock MBE, who along with Chair of the International Committee, Norma Hazzledine, presented Paul with flowers to be given to his wife.

Top bowlers from four different disability bowls groups played in the elite 16-person event. The groups represented were BWBA (for wheelchair bowlers), CPSport (for bowlers with cerebral palsy, strokes and head injury), VIBE (visually impaired) and EALABA (for amputee’s and other disabilities). Each disability group nominates 4 top bowlers, they are then drawn into 4 pools consisting of one bowler from each disability group. They play a round robin in their pool, the winners of each pool determine the semi-finalists.

The previous year’s champion has automatic selection for the following year, in order that they may defend their title, this year it was Bob Love.

The other semi-finalists, George Ridgeon (Gloucs) and Chris Gray (Kettering) had a real tussle with George going 8 shots up in four ends. Chris then picked up 10 shots in the next 6 ends, George had a better short spell but then Chris won the last four ends. The eventual score finishing 19 – 13 to Chris, a real ‘see saw’ of a game.

The Final was no disappointment. Both Bob and Chris played really well. Chris put up a good fight but there seems to be no stopping Bob, he came out the winner once again. The final score 21 – 10, Well done Bob!

Congratulations to all of the players for a wonderful display of bowling over the whole weekend.

This year the trophies were presented by Paul Brown, DBE Chairman.

A ‘big thank you’ to the Gedling IBC members who helped over the weekend, they were, as always, brilliant!

The first DBE International Trials were held at Solihull IBC over the weekend 5th/6th November 2016 where 64 players/directors, all competing for a place in the next stage of trials, were put through their paces.

Standards were high and the selectors delighted with the effort and commitment shown by all the attendees.

A number of players and directors have been selected to attend further trials at Gedling IBC on 26th February 2017 after which the squad to represent England at the Home Nations Championships in April will be chosen.

A full list of players/directors to attend on 26th February is attached.

Disability Bowls England’s Paul Brown along with Bowls England’s Ellen Falkner have been appointed Athlete Ambassadors to support Team England in the lead up to 2018 Commonwealth Games in the Gold Coast, Australia. 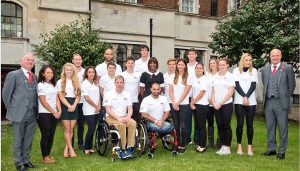 Disability Bowls England send their congratulations, are very proud and wish the athletes selected for the Games every success.

Over 100 DBE Members enjoyed a great Celebration evening at Solihull IBC on 5th November to celebrate the progress made over the year and present 3 player awards.