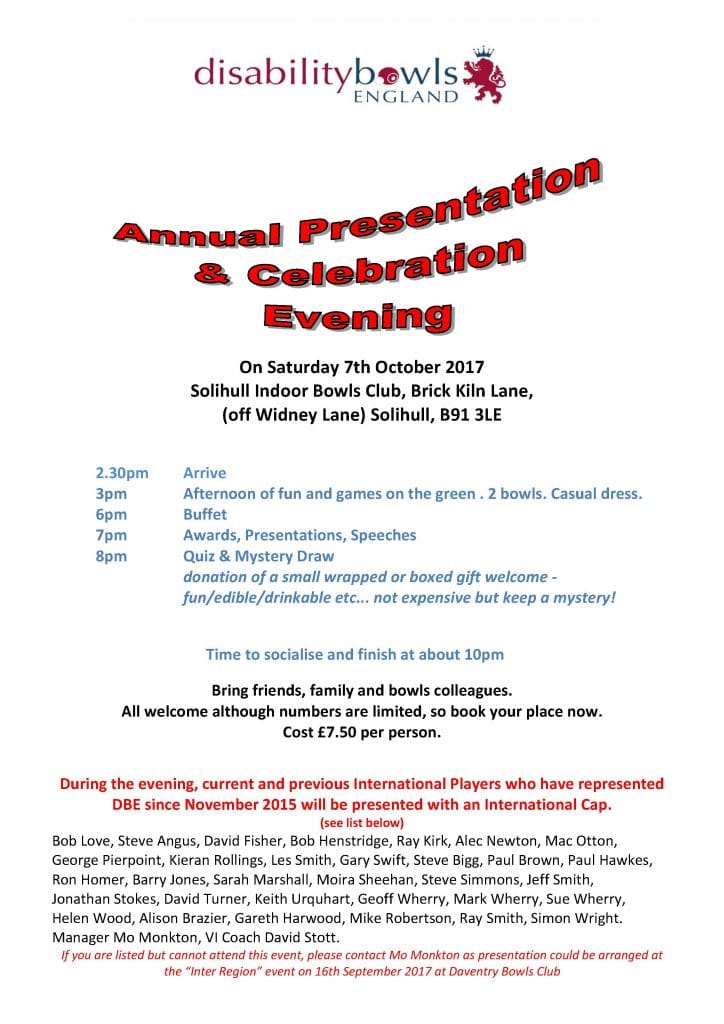 Poster:  Annual Presentation.pdf
Please find attached a poster giving details of the annual presentation evening where International Caps will be presented to each player who has represented DBE since 2015.
I am aware that a few players will not be able to attend on 7th October because they will be representing VIBE in a UK Indoor Event and I wish them good luck.
If you cannot make it on the 7th October we will make a special presentation on 16th September at Daventry BC at the DBE “Inter Region Challenge” where it is expected that if available, all Internationals, competition winners and elite players will put their name forward to play.
If you are listed and cannot make either event, please get in touch and I will try and sort something out.
Mo Monkton
Disability Bowls England

Bowlers going through to the National Outdoor Singles Finals at Leamington Spa on Sunday 16th July are as follows;

The format for the finals will be the same as the qualifying games.

Bowlers will draw out of the hat for which of the two groups they will play in. There will be a round robin in each group followed by the two group winners playing in the final.

I would like to take this opportunity to thank the four clubs, Selby BC, Polly BC, Egham and Wellington BC’s who kindly let us use their facilities for the regional qualifiers, providing markers and sustenance throughout the two days. You were all WONDERFUL!

I wish all of our bowlers competing in both the National Singles and Pairs at Leamington on the 15th and 16th July, the best of luck and good bowling.