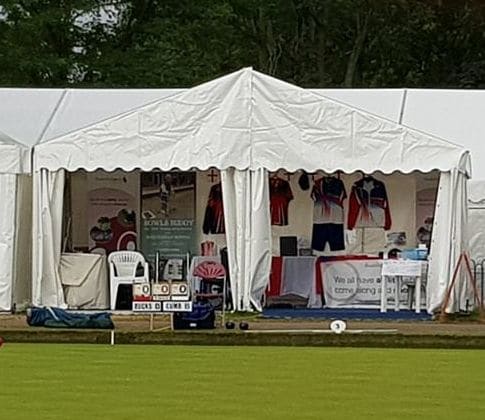 VOLUNTEERS needed to help out for a day in the DBE Marquee at the Bowls England National Championships.
Aug: 6th, 8th, 10th, 12th, 14th, 16th, + each day from 18th to the 30th Aug.
To apply, email mo.monkton@disabilitybowlsengland.org.uk 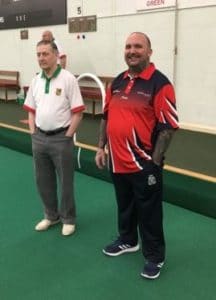 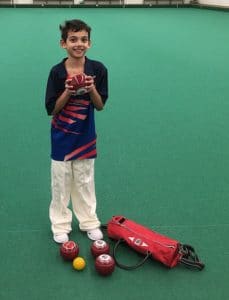 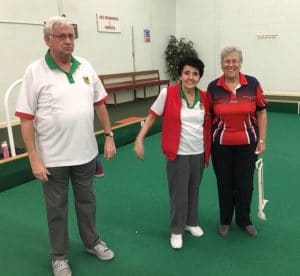 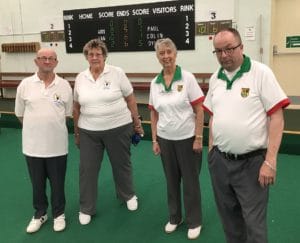 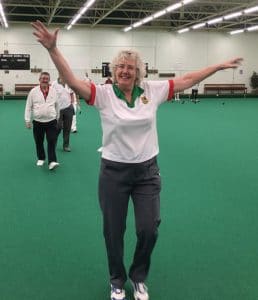 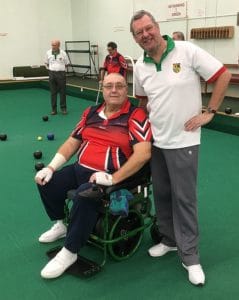 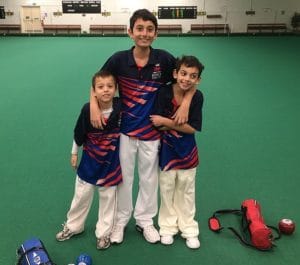 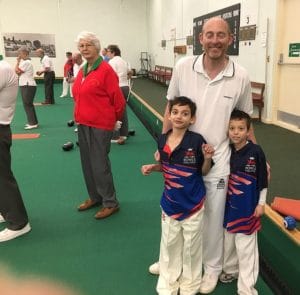 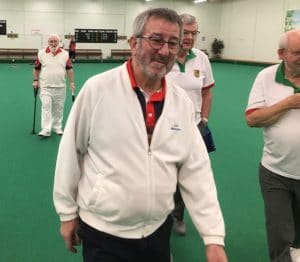 The highlight of the day was our youngest  triples Jake lead, our youngest DBE member Thomas second and Dylan skip, ages 6, 8 & 11.  They won there rink with dad David Martin, I gave them top rink and they received chocolate bar each.

The game was played in good spirits and they have asked us back next year . 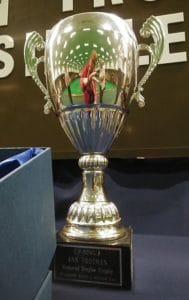 The entries this year were terrific, I had to close the entry as there were more bowlers wanting to play than we could accommodate in two days play.

As this is not a DBE event it is open to any bowler with a disability, not just from England.  We had 4 bowlers from Scotland, 1 from Wales and 1 from the Isle of Man!  It all goes to making for an interesting competition.

The format for the event was 3 bowl singles, played in four groups round robin followed by a semi-final and final.

The winner of the groups were as follows;

Although all of the group winners won all of their games, the results were very close, the last round match for two of the groups were deciding games. Pink group was particularly close it was a last end decider as to who went through to the semi’s.

One of the spectators was asked to draw the names ‘out of the hat’ as to who would play who in the semi-finals.

Both Semi’s were terrific games, neck and neck for most of the match.

Up to the 20th end there was only 2 shots between John and Blair. Blair won the last 2 ends finishing 20 shots to 15.

All four bowlers played so well and entertained the spectators.

On to the Final….Good game….Blair went in front to start then Joe got going and pulled back, but Blair got into his stride and pulled away leaving Joe too much to do in the time that was left, the final score 21 – 9 to Blair.

Quite a fitting end as this years trophy for the winner was a Celtic ‘Quaich’ otherwise known as a ‘Friendship Cup’.

The games throughout the tournament were played in ‘good spirit’, the markers and helpers were fantastic as always at Gedling IBC. They worked tremendously hard as several of our regular helpers were ill with the awful ‘bug’ going around.

We all went home shattered but happy, a job well done!

DBE captain Colin Wagstaff and the DBE teams were greeted with a warm welcome from Carlton’s captain Ingrid Turner . 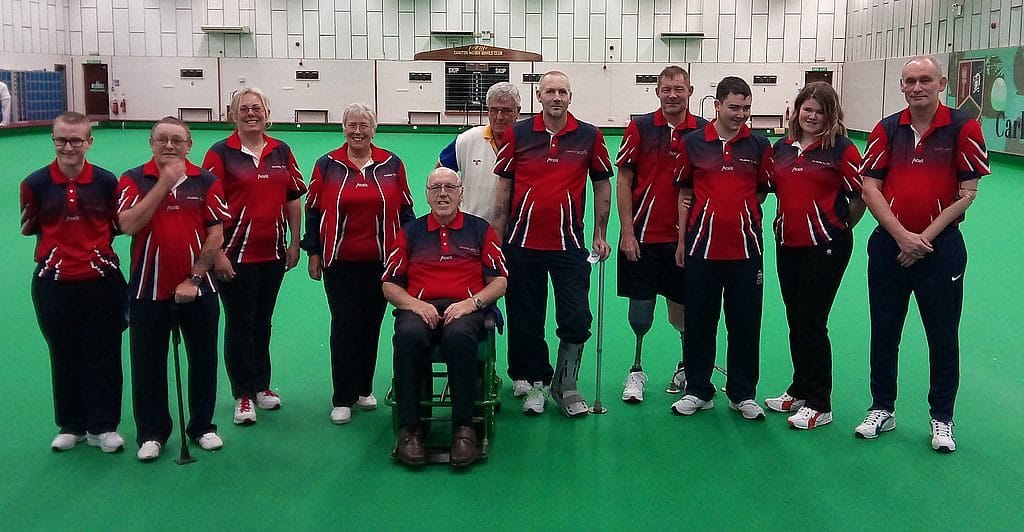 Rink 2 team – Chris Richards, John Harding (Carlton player on loan ) and skip Tony Richards
Rink 3 team – Sally Koenig, David Stern, Mark Cooper
Rink 4 team – Keith Haggerwood, Rhys Taylor, Colin Wagstaff
Rink 5 team – Alice Atkin, Harry Atkin, Mickey Belcher
Level of play was quite even and the scores didn’t really reflect the level of play on each rink, every rink had some very good bowls.  At the half way point refreshments were provided tea and biscuits that were most welcome many thanks to Kirsty and Anthony Atkin.
DBE won one of the four and the overall score was Carlton IBC 64 – 49

All in all a very pleasant friendly match was had by all.
Report by Sandra Groves

This event is aimed at the DBE members who are not eligible or haven’t yet been classified.

The competition was run on a knockout format with the first-round losers going into a Plate competition.

Originally there were 16 entries but due to illness the numbers dropped on the day to 12. Never the less it was a very competitive event with some terrific bowling and it was great to see some new faces amongst the competitors.

The getting into the National Singles final was Daniel Adams from Harlow, Essex along with Anthony Page from Somerset. It was a close game all the way through with some wonderful bowling from both competitors. Anthony coming out the winner by 19 shots to 13. 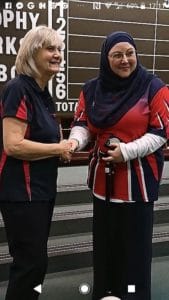 Out of the four finalists, 3 were new faces, very exciting and a great start to the New Year.

The organising committee of this event has invited players to be part of the lawn bowls event taking place in Korea from 30th June – 6th July 2019.

Attached is a copy of the General Information sheet + preliminary entry form.

Entry is open and at players own cost.  All classes in the competition will be combined.

Members of Disability Bowls England wishing to enter should register their  interest with the organising committee and for information only,  inform DBE Comp Secretary Maggy Smith. 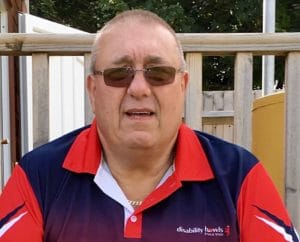 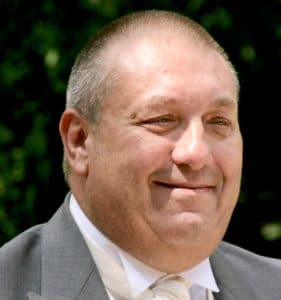 Phil Armstrong based at the Peacehaven & Telscombe BC has accepted this exciting & challenging role with Disability Bowls England to promote bowls for people with disability in the Sussex area.

Phil has worked hard along with other officials at the club to promote and develop opportunities for players with any disability or impairment to join the sport of bowls. The club has achieved Sport England’s Clubmark and Bowls Disability Mark status which confirms they have the facilities and policies needed to run a successful, proactive, & inclusive club. The Club was also awarded Runners Up in Bowls England Club of the Year 2018 after being Regional finalists in 2017.

Phil will help clubs become inclusive, develop and oversee opportunities for people with disability to continue or start to play bowls as well as seek sponsors and partners to work alongside Disability Bowls England. Bob Henstridge, also a member at the Peacehaven Club was recently appointed an Ambassador for Disability Bowls England and along with other Ambassadors in the region will help Phil develop strong links with players and clubs in the Sussex area.

Interested clubs, coaches, people, volunteers, groups and partners can get in touch with Phil by emailing : philarmstrong@icloud.com