The structure and history of bowls for people with a disability. 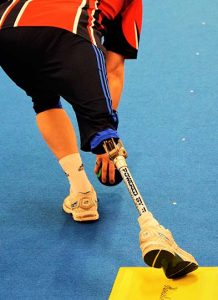 Unlike mainstream bowls, disability bowls’ origins lie within the disability specific multi-sport organisations and clubs. It was one of many sports offered to people with a physical and or visual impairment.
British Blind Sports – for people with all degrees of visual impairment.
Cerebral Palsy Sport – for people with cerebral palsy, strokes and head injuries.
British Amputees and Les Autre Sports Association – Les Autre being any disability not fitting into the other groups ie; polio, MS etc.
British Wheelchair Sports , ‘Wheelpower‘ as it is now known.

In 2004 a ‘bowls’ specific umbrella organization was formed and named ‘Disability Bowls England‘, bringing together these four organizations, primarily for communication and selection purposes, is a national organisation representing bowlers with physical and visual impairment. Host a ‘Masters Tournament’ each year for which the four member groups nominate their four top bowlers to play off over a weekend to determine the ‘Master’ bowler for that year. Is affiliated to International Bowls for the Disabled. With Gedling Indoor Bowls Club, Nottingham being adopted as their ‘home’. 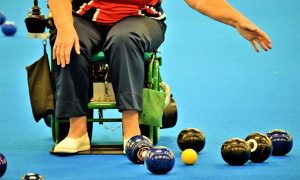 The most prestigious event for bowlers with disabilities up until1996 was the Paralympic Games.
At the International Paralympic Committee General Committee meeting in 1995 held prior to the Paralympic Games in Atlanta, bowls was dropped from future Paralympic Games. The criteria for the inclusion of a sport to the games had been changed, and bowls no longer qualified.
This was a devastating blow to the sport and its players. Moral in the GB squad prior to the Atlanta Games was at an all time low but team building and shear determination came through in the end. The team took 6 of the 7 gold medals on offer along with 3 silver and 2 bronze. A fantastic result!

Although it was out of the Paralympic Games, it was kept in the IPC World Championship Calendar.

At the IPC World Bowls Championships in Australia 2002, a sports assembly was held and at which the Chairman put forward a motion with regard to forming a Disability World Bowls Federation, independent of the IPC, on similar lines to World Bowls. The assembly voted to go with the idea. A new committee was voted in to implement the procedure over the coming year or so, with the backing of the IPC.

The IPC are looking for all sports to form their own World Governing Bodies, alongside, or independently of, their non-disabled counterparts.

This at least gives the sport control of the most important factors. The events will be held in countries already geared to the bowls, at venues worthy of the competition, where the skill and talent of the bowlers will determine the outcome of the game, not the surface they are playing on. Also, the competition will be run by people committed to the sport, without compromise to either the game or the participant. Unlike in the past, where the venues provided for the Paralympic competitions often left a lot to be desired when being held in countries where bowls was not a national sport. In Atlanta for example, the competition was held on an Astro- turf practice hockey pitch. 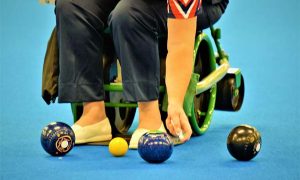 In 2007 in Sydney Australia, the first World Championships under the new flag of ‘International Bowls for the Disabled’ (IBD) was held.

2002 Manchester CWG saw bowls include a disability event for the first time alongside the non-disabled event. It was also the first time that bowlers with a disability had been treated as part of Team England. Sadly it was dropped from the following 2006 and 2010 games but thankfully is being included in 2014 in Glasgow, Scotland. DBE commend the Manchester 2002 and Glasgow 2014 CWG Committees for having the vision to include a disability bowls event in the games. We hope that future hosts show the same courage and foresight. 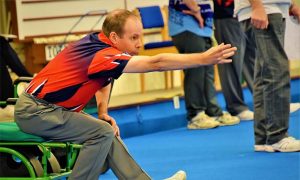 Although Bowls is no longer included in the Paralympic Games, the impact the London 2012 Games had on the nation, show casing the skill and potential that people with disabilities can achieve, it is hoped that this will help in the future development of sports which are accessible all. Bowls is one of these sports and is more inclusive than most.