Gedling IBC in Nottingham hosted an International Test Match between England and Scotland over the weekend of 14th /15th Nov 2015, which saw England victorious after a gruelling battle, played with great camaraderie and to a very high standard. 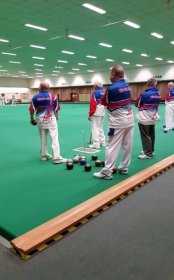 Both Countries selected a mixture of new caps & seasoned International players and the 100+ supporters were enthralled by quality and standard produced by all the players.

The organisers were delighted when Ellen Falkner, Commonwealth Games Gold Medallist, accepted the invitation and took time out from her busy schedule to present the trophy and silver salver to the winning Captain.

This event, which was for players with a physical disability will now become an annual fixture in the International calendar with the Countries competing again in Scotland next year.
The weekend was such a success that Disability Bowls England plan to arrange further Test Matches and events involving players from other groups within the organisation.

Each team of 5 split into Pairs & Triples on day one, followed by Singles and 4’s on day two.

2 points were awarded for each win and the country with the highest number of points after both days play were presented with the trophy and winners shield. (results table below)

England lead 6-2 after session 1, but Scotland fought back in the second session taking 6 points to England’s 2 making the Countries level 8-8 going into day two.

Points were shared in the penultimate session which left everything to play for in the final session involving 2 matches of singles and two matches of fours.

All players raised their game in the final session and the standard of play was breathtaking. However, it was England that held their nerve to win both singles and one of the 4’s matches to seal the victory.

See some pictures from the event.