It was a fantastic day and a great way to end the 2016 outdoor season. The sun shone and the players provided the large crowd of spectators with some exciting matches and a high standard of bowling.

Daventry Town were brilliant hosts and on hand all day with a constant supply of tea, coffee, cakes &  snacks  as well as a bar and cooked meal at the conclusion of matches. 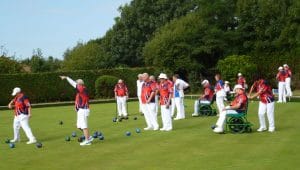 Points were awarded to each winning rink throughout the day. Competition co-ordinator Margaret Smith had the players on the edge of their seats as she announced the winning region. With the South East and South West level on points, players were anxious to hear who had the better shot difference. The South East Region gave out a huge cheer to hear that they were the champions and collected the shield and individual trophies from Margaret Smith, Steve Watson and Club Chairman Mike Robins.