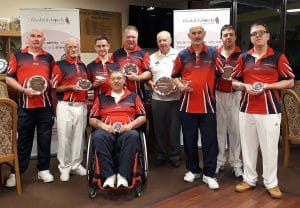 The pairs were as follows:-

The competition was a Knockout format with the first round losers going into a Plate competition thus guaranteeing all teams a minimum of 2 matches.

It was a well contested tournament with a good mixture of disabilities and abilities. There were bowlers from all parts of the country, some new faces and many familiar ones.

These ‘Open’ competitions are a good opportunity for some of our less experienced bowlers to have a ‘crack’ at some of the seasoned players and in some cases beat them. The best way to learn and improve your own game is to play against experienced, successful players.

The day went very well and the competition was played in good spirit. The Solihull volunteers were very helpful and the club welcoming.

Congratulations to the Plate winners Gary and Mac

Full score sheets can be viewed on the attachment:-  Championship Score Sheet

Trophies were presented by Paul Rees, Director of Solihull IBC.

I look forward to receiving your entries to our future events.