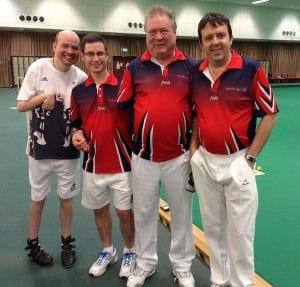 This year’s Ann Trotman singles tournament was well contested with 16 players competing.  We had had 20 entries originally but due to illness and other problems the number finished at 16.

The event was run in four groups playing a round robin followed by a knock out semi and final.

The four group winners were Steve Angus from Sunderland, Jonathan Stokes from Luton, Gary Swift from Harrogate and Chris Gray from Northants.

Steve and Jonathan had a really battle in their semi taking the game to an extra end, being all level when the bell rang.  Steve won the extra end by one shot.

Gary and Chris’s game wasn’t so close finishing 21 shots to 9 taking Gary into the final to play Steve.

It was a close game for the first half, but Gary forged ahead playing some accurate weighted bowls when Steve put his bowls close to the jack.  The eventual score being 21 – 8 to Gary.  He was a worthy winner as he had played exceptionally well all weekend.  His drawing game as well as his accuracy with weight made all the difference in his matches.

Well done Gary! A new name on the trophy and certainly a bowler on top of his form.

Thanks, were given to the supporters who stayed to the end to watch the final and to the wonderful Gedling Helpers who marked and pushed wheelchairs all weekend.

We look forward to the next event.