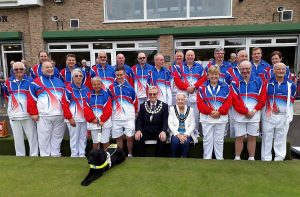 After a rousing opening ceremony Wales faced England in the first session of pairs and triples matches. England dominated the session winning 5 matches and drawing the other amassing 11 points from a possible 12. This sent out a clear message to the other Countries that England had their eyes set on back to back Home Nations wins.

Wales then had to re-group for the 2nd session of matches against Scotland and overall put in a better performance. Scotland however proved the stronger nation winning 4 matches to take the session by 8 points to Wales 4.

Saturday morning and with the sun shining, Scotland took to the greens ready for the battle against England hoping to pick up some much-needed points. England had other ideas, they looked confident and determined and played very well across the board to win 5 of the 6 matches to pick up another 10 points against Scotland’s 2.

After a short break, England then faced Wales in the first of the Singles & Fours sessions. The excitable young Welsh physically disabled 4 played with enthusiasm and vigour to win their match by 13 shots to 6 picking up a valuable 2 points. The session ended with 3 wins per country and a much needed 6 points for the Welsh Squad.

The final session on Saturday saw Scotland take on Wales. Scotland knew they had to pick up points to keep in touch with England and battled in the sunshine and heat to win 4 of the 6 matches collecting a much needed 8 points.

Sunday morning and the final session, England v Scotland. Regardless of the overall situation this is always a tough encounter with players playing for pride as well as points. England knew that one win from the 6 matches was enough to lift the trophy but also knew that Scotland were ready for battle & looking for revenge.

England were prepared, they wanted to win all 6 matches and lift the trophy with a resounding win and they did just that. Mike Robertson’s win in the singles after a tough match with John Wardrope, secured the 2 points needed and the squad responded with an overwhelming and convincing result winning 5 of the 6 matches.

England non playing Captain & Ambassador Bob Love was delighted to be presented with the Championship Trophy from bowls legend Mr David Bryant CBC who had watched the final session of play.

David enjoyed the matches and said was delighted with the standard and camaraderie. Everyone at the venue was grateful for the time David spent chatting with players & spectators and his presence was a fitting end to the proceedings.

Scotland : Bob Dick “Although Scotland were hoping to perform better than they did, there was no doubt that England were worthy winners of the Tournament. Scotland did take the opportunity to introduce players with little or no experience at International level, so it was a great opportunity for these bowlers, as well as our recognised bowlers, to show their skills. There is, no doubt, a learning curve for these new bowlers, but as Team Manager, I was happy with their performances, which gives my Coaching team, the opportunity to further develop their skills.

All in all, it was an excellent tournament, in which to take part, and it was a great pleasure to see the true legend of bowls, David Bryant CBE attend and present the Trophy to England.”

England : Mo Monkton “Overall I feel that all 3 countries are developing & improving, and it will be great when Ireland enter a team which will make it a full Home Nations event.

I felt our England squad played with determination & enthusiasm and fully deserved the great comments and accolades from local spectators. They really wanted to do well in this outdoor Championship having won the Indoor event last time and they certainly stepped up to the mark. I am very proud of the squad.

England now has number of experience county players which not only strengthens the International squad but allows our younger players the opportunity to learn and develop. This type of event sets the bench mark for those aspiring to represent England and as DBE player numbers rise the fight for places will become much tougher, but all the more rewarding”

Wales : John Wilson “As Team Manager, this event was a great opportunity to introduce a large number of new bowlers who attained their first welsh cap into the International scene. It provided an opportunity to experience high level competition against some seasoned bowlers from Scotland and England on greens of a high quality.
Some quality bowling was on display from many of our players and as a Team Manager I was delighted by what I saw from new and established bowlers. This bodes well for our development as we continue in our commitment towards inclusion in sport and increasing the numbers of players available for international selection for the future. A superb venue and a great event that we enjoyed participating in and a definite success in our first step to rebuilding following our commonwealth games success with the continued support from Disability sport Wales.”

Pictures from the event in the gallery.