The weekend of Saturday 2nd and Sunday 3rd March featured our National Classified Singles Championship 2019 at Gedling Indoor Bowls Club, Nottingham.  28 bowlers travelled from the four corners of the Nation to compete in our most prestigious event.

Each bowler competed against others from the same Classification, B6, B7 & B8.  The groups were as follows:-

Competition was tough and at the end of the first day Paul Brown lead the B6’s, Bob Love – B7/1, Steve Ireland and Jonathan Stokes were level in B7/2, Dylan Morton – B8/1 and Kieran Rolling lead B8/2. 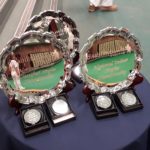 The battle for these fantastic trophies continued early Sunday morning and the standard of bowls just got better and better as the day progressed.  Our markers and umpires were continually called upon to measure.  The standard of drawing was excellent complimented by the occasional firing shot.

By early afternoon the B7 and B8 Group winners had been decided and they progressed to the final.  Due to numbers, B6 entrants played on a round robin basis and the winner being made the Champion.  At the start of the finals, B6 group matches continued with Paul Brown leading the group on 8 points and he was playing his last game against Ray Smith, Steve Bigg was playing Joe Peplow.

Kieran Rollings and Dylan Morton contested B8 and the match lived up to the high standard we had come to expect.  Dylan crept into a five shot, the pressure increased from Kieran pulling back to draw level and then take a slender lead before finally winning 18-15.

Everyone was convinced that Paul had the B6’s title in the bag, but past World finalist Ray Smith, had other ideas he dominated from the off.  As their match was drawing to the close everyone realised that if Joe Peplow was to beat Steve Bigg then he would also be on 8 points.

At the bell for the last end of Steve and Joe’s match, they were tied at 12-12, the umpire was called after all bowls had been delivered, to measure………Joe took shot by one-quarter of an inch, giving him a 13-12 win and tying the B6 Group, with Paul, on 8 points.  It was now down to Maggy Smith to calculate the shot difference.  To everyone’s surprise the shot difference was only one better and in favour of Joe, what a fantastic finish to a brilliant tournament, no one could have predicted such an ending.

DBE’s Director/Trustee, Shirley Hughes presented the trophies in conjunction with Mo Monkton.  Special thanks were given to Maggy Smith, Gedling IBC and all the helpers, their excellent support made the event run without a hitch.

Finally, Maggy Smith announced that through the various raffles and the ‘Old Gits’ tour, they had raised £1000 and donated it to DBE.

Many thanks to everyone involved for making this Championship so special.

Photo story of the event, go to Gallery