Ten teams of triples competed over the 2 days.  Teams were split into two groups played a round robin with the top 4 teams competing for the prizes.

Competition was very keen with many close matches.

Group 1 with one round to go, found two teams on 4 points and Colin Wagstaff’s team on 6.  The final round, Colin’s team kept a clean sheet and finished on 8 points, Ray Kirks team finished in second place on 6 points and went on to play-off for 3rd or 4th place.

Group two, with one round to go looked to be a forgone conclusion. John Greaves’ team finished their four matches on 6 points with plus 26 shots.  The remaining four teams all had one match to play.  Ray Smith and Gary Swift’s teams were both on 4 points, and their last match was against each other.  Their shots differences of plus 16 and plus 14 respectively left them both needing to win by an awful lot of shots which seemed unlikely as both teams had played so well in their previous matches.  Gary’s team shifted up a gear and won the last match by an amazing 21 shots finishing with a total of 6 points and plus 35 shots.  Disappointing for John’s team but they did play off for the 3rd and 4th prize.

Final placings were as follows; 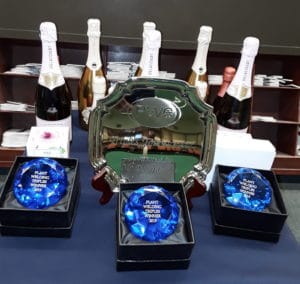 Prizes and prize money was generously sponsored by Doug Carlin of Plant Wedling, Colwick , Nottingham.  Doug, his wife Gill and granddaughter Sky, all in the above photos, came along to present the prizes.

The Gedling helpers were wonderful as always with many of them coming along to watch when they weren’t working on the green.

Several new faces and many old ones in the competition making for another successful weekend.