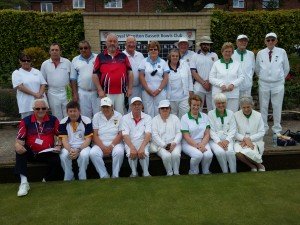 DBE members travelled from as far afield as Chesham, Harrow, Leominster and Somerset to play and huge thanks to all of them for their sterling efforts.
The match itself was nip-and-tuck throughout, sometimes DBE were ahead and other times RWB crept into the lead. The ‘star triple’ for DBE was the Yeovil trio, skipped by World Disability Bowls B2 Champion Ron Homer, accompanied by lead Terry Mathews (himself World Blind Bowls B4 Champion and WDB silver medallist) and relative newcomer – and rising star – Mo Perry. Together they had an emphatic win over their hosts. The other winning triple for DBE was that of Marjorie Convey (Harrow), Mary Hynes (Chesham Pioneers) & Weston-super-Mare’s Bob Rossiter, a former England B4 international and Clarence Bowling Club member.  Despite being on losing rinks, there were several excellent performances from other team members who showed great promise for future representative and international events. 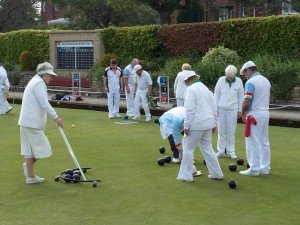 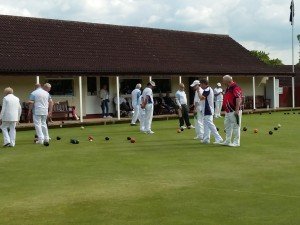 Thanks also go to our supporters who came along to help on the day and to cheer us on – including DBE Chairman Paul Brown and national Team Manager Mo Monkton.
In the end, the final honours went to Royal Wootton Bassett who prevailed by just six shots.
DBE: Sue Rogers, Janet Gehrig & George Baker 11-15; Terry Mathews, Mo Perry & Ron Homer  23-8; Christine Linegar, Jeannette Maisey & Bill James  11-18; Eric Shackleford, Ian Robertson & Tessa Furzeman  12-26; Marjorie Convey, Mary Hynes & Bob Rossiter16-12.
DBE 73,  Royal Wootton Basset 79
DBE expresses grateful thanks to the Committee and members of Royal Wootton Bassett Bowling Club for their hospitality and generosity  and, all being well, we look forward to a repeat match in 2017.