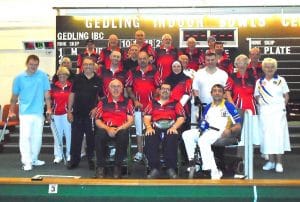 The format was 3 bowl pairs each game lasting one and a half hours and first-round losers going into a Plate competition.

It was great to see some of our new members entering this competition and travelling so far. One new member Khalia was surprised to be the only lady bowler in the competition but she was soon chatting and making friends. We really must find some more female bowlers.

It was also good being able to welcome back Adam Summerscales who has been away at University and David Walker who has been out of bowls for almost 4 years with a back injury. Dave is now using a bowling arm whilst bowling from a wheelchair as he is unable to bend forward due to his injury. He has adapted really well to the change and is as keen as ever to get back into competition. Great to see him back, we have missed him!

After the first round going through to the main event were;

Paul is one of our new bowlers and has been playing with Dave at Leeds IBC, he bowled really well in this his first ever competition. Dave must be teaching him well!

The other teams going through were;

Adam and Tim had a closer game with Colin and Ray winning 12 – 8. 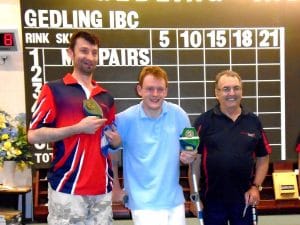 In the Final of the Maiden Pairs, Adam and Tim got off to a flying start winning the first 4 ends, the final score being 7 – 4 to Adam and Tim.

Well done to both of them, it was the first time they had played together and how well they did! 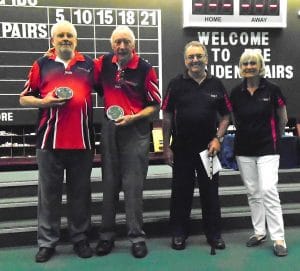 The final of the Plate was played between;

The presentations were made by Ray Smith DBE Board Member.

Ray thanked the helpers, congratulated the players, said how much he had enjoyed watching and wished everyone a safe journey home.

It was one of the hottest days of the year and very tiring but all the bowlers went away in good spirits and looking forward to the next event.

Watch this space! Next weekend is the National Singles Qualifiers.