Doug’s dad George first started sponsoring the event back in 1996. When he retired some years ago, Doug took over the business and continued to support the tournament. It has proved popular from the beginning and attracts bowlers from all parts of England, Wales and even on occasion, Scotland. 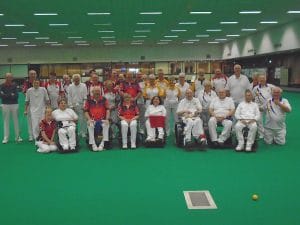 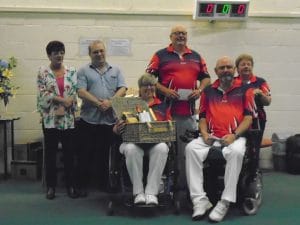 Making it through to the final without losing a match were ‘newbies’ Helen Wood, Simon Wright, both from Yorkshire along with Kevin Vernon from Devon. They met the ‘Old Masters’ Percy Powell, London, Kevin Woolmore and Steve Dobbins from Wales. Helen’s team took the first prize winning 10 shots to 8. All of the games were 1 hour 45 minutes to the bell. After six games in two days it’s a well earned win! 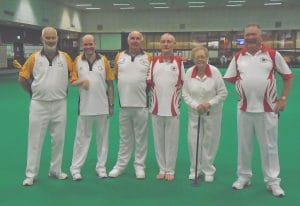 The top four places were awarded prizes. The winners received a lovely art glass trophy each, a Luxury Marks and Spencer wicker hamper full of goodies each and £50 cash each. Second prize was a M & S hamper, third prize an Afternoon Tea Hamper and fourth a selection box of M & S goodies.

Doug and his wife Gill made the presentations after which Simon thanked the wonderful Gedling helpers and everyone else. I congratulated all of the bowlers on the standard of their bowling, wished everyone a ‘safe journey home’ and everyone left very tired but seemingly, very happy.