On arriving at the club for the Top Region Challenge at 8am (far too early afraid of getting held up in traffic) you would have been excused if you had thought that winter had arrived. It was bitterly cold. Fortunately, my husband had the foresight to make a flask of coffee and a breakfast roll which we tucked into and soon warmed up.

By 8.45 club members and bowlers alike started to arrive from all areas of the country, some travelling great distances.

By 9.15 the clubroom was buzzing, bowlers checking in, tea and coffee flowing, members old and new greeting each other, catching up on news and preparing themselves for the day ahead.

By 9.30 Manager Mo was organising the bowlers into their respective teams for the ‘photo call’, all looking very smart in their DBE shirts.

By 10.10 they were on the green and ready for the off. I blew my whistle and ‘battle’ commenced!

Teams of 7 bowlers forming a Triple and a Rink of Four from each of the four regions, North, Midlands, South East and South West. They were to play a round robin against each of the regions in three rounds during the day. 2 points awarded for a win 1 for a draw and a bonus point awarded to any region winning on both of their rinks in the same session. 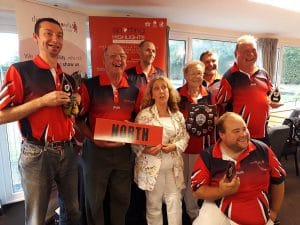 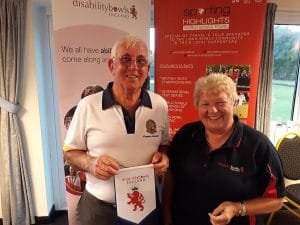 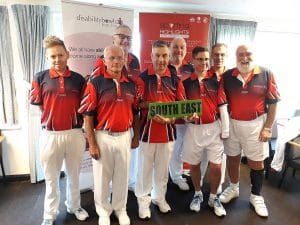 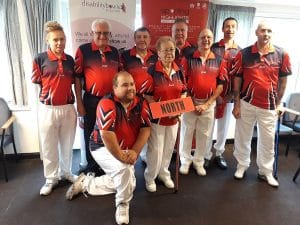 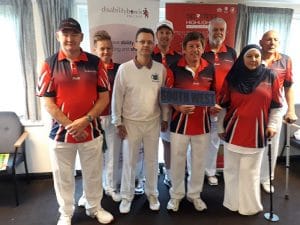 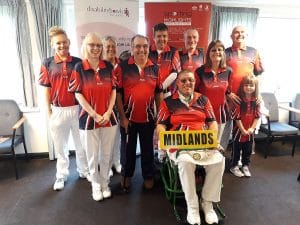 The final round finished with the North unbeaten picking up a maximum total of 15 points Congratulations to captain Gary and his team.

In second place were the South East with 9 points with the Midlands and South West on 2 points each.

The weather warmed up slightly when the sun came out for a short spell but sadly the rain came along toward the end of the last session. We were all glad to get inside and get warm and dry.

The ladies at the club along with the volunteers served up a hot, welcomed meal.

DBE Board member Duggie Mitchell, also representing the club said a few words thanking the ladies in the kitchen and other club members and then introduced the Lady Mayor who gave a short but enthusiastic speech.

Steve Watson of ‘Sporting Highlights’ the very generous sponsors of the event stepped forward then to present the shield and trophies to the winning team in a jovial manner, announcing that in 5th and 6th place were Scotland and Wales. Thus making everyone laugh! He followed up with the promise of sponsorship for next year. You’re a ‘STAR’ Steve!

Manager Mo wound up by awarding some of the England Squad bowlers with their International Caps embroidered with their personal player number. Mo also thanked the 4 volunteers from Gedling Indoor Bowls club who had travelled down from Nottingham to help for the day and she wished everyone a safe journey home.

Bob Rossiter one of our new members came forward and asked to speak, saying how much he had enjoyed the day, the camaraderie and the whole atmosphere surrounding the event and was looking forward to the next time.

All in all, another great day, everyone leaving tired but happy.

I look forward to seeing you all on October 7th at our fun bowls day and presentation evening at Solihull IBC.