Eight bowlers from all parts of England from Plymouth in the south to Bridlington in the north and several points in between, came together to compete in the Maiden Singles which is aimed at any member bowler who has NOT won a DBE singles event.
Bowlers were drawn into 2 groups, each competing in a round-robin of 3 matches followed by the winner of each group playing in the final.
It was great to see 3 new members had entered.
Colin Wagstaff from Lincoln won Group 1 , winning all 3 matches, gaining 6 points with Julie Deferville , Bristol , in 2nd place on 4 points.
Arthur Redfearn from Bridlington, Yorkshire won Group 2, also gaining 6 points after a close match with Adrian Mellows, Northants, who finished on 4 points.
The other competitors were Amy Brooks, Stephen Stockley, Alex Comack and John Hollowell.
The final was a very close fought match and great to watch. On the penultimate end the score was 15 shots all on 16 ends.
The final end concluded with a ‘nail biting’ measure, with Arthur’s bowl taking the shot by half an inch!
All of the games were played in good and fair spirit.
The Maiden Singles salver was presented to Arthur and photographs taken
‘Thank you’s’ were made to the brilliant Gedling helpers, who turn out every time so willingly, marking, pushing wheelchairs, making tea and coffee and generally making everyone feel ‘at home’.
All in all, a ‘Good Day’.
Maggy Smith 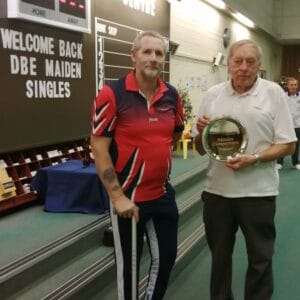