The weekend when well after the initial problems of a bowler who had entered and confirmed he was coming didn’t show up and didn’t let anyone know.
The B6 and B8 groups had 6 players and so played a Round Robin in their classification, playing 5 matches in total over the 2 days.
The B7 classification of which there were twice as many bowlers played in 2 groups Round Robin with the winners of each group playing a final.
B6 – Steve Ireland came out top in this group winning all 5 of his games finishing on 10 points +48 shots with Joe Peplow in 2nd place on 6 points and Craig Bowler on 4 pts.
B8 – John Greaves won this group , again winning all of his matches finishing on 10 points + 71 shots with Kieran Rollings on 6 points +12 shots and Dave Fisher 6 points +5 shots.
B7 – Group 1 winner was Fynn Kyser on 10 points + 52 shots ,Steve Angus 8 pts +37 shots and Paul Baker 4 points .
Group 2 winner Tim Swann on 8 points +17 shots, Jonathan Stokes 7 points +41 shots and Helen Wood 7 points + 39 shots.
Jonathan and Helen played each other in their last match and drew !
B7 Final – Fynn had a wonderful match and won 21-3
Judy Plater our new Development Officer came along on the Sunday and presented the trophies.
Sue Davies, our secretary came along on the Saturday also.
As always, the Gedling IBC volunteers were wonderful 24 of them turned out for the weekend, marking, pushing wheelchairs, umpiring, making teas and coffee, making rolls and running a raffle one day and number card the next . £200 was taken over the 2 days and will go to DBE funds.
THEY ARE ALL EXCEPTIONAL!
These kinds of events wouldn’t happen if it weren’t for volunteers in all parts of the country.
Maggy Smith MBE, DBE President. 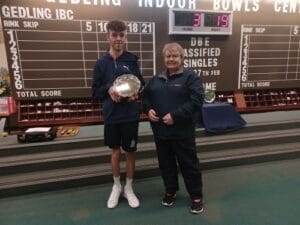 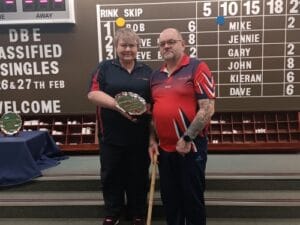 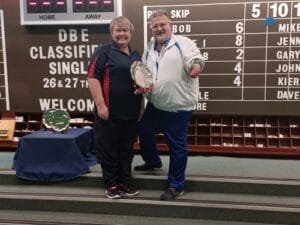