16 Pairs of players arrived at Royal Leamington Spa BC in Warwickshire to contest the National Open Pairs Championship.

The competition is played in a Knockout Format with those losing in the first round entering a Plate competition.

In the Plate competition Tom and Craig were involved in a very close match against Steve and Chris with the score at 12 – 12 after 11 ends, then Steve and Chris managed to win the remaining ends to win the match 12 – 20. In the other Semi-Final Rhys and Harry started slowly against Steve and Steve and found themselves 11 – 1 down after 5 ends, they staged a fightback to get the score to 8 – 12 after 9 ends but at the end of the match Steve and Steve had won 23 – 12.

The final of the Plate was an excellent match with both Steve and Steve and Steve and Chris playing some scintillating bowls and the game sung one way and then the other and at the end of the session the scores were tied 12 -12 an extra end was required to decide the winner, the final end saw Steve and Steve pick up a 3 to win the competition 15 – 12.

The Final will be held during the Bowls England National Championships at the 30 August.

Disability Bowls England would like to thank Mal Smith and John Radford who gave up their time to Umpire the competition. 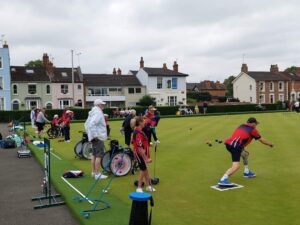